Margaret has been a Toy Library Auxiliary member and volunteer for 19 years, having joined in 2000.

During her time Margaret has seen many location changes, from a tiny room the size of a storeroom to the old large laundry, then another room at the end of the old laundry and now the brand new Toy Library space in the Community Health Centre.

Margaret has worked tirelessly as an Auxiliary volunteer and during her time she was president for six years.

Margaret and her late husband Brian became a respite family for a young boy and experienced first-hand the real value and support that the Toy Library offered to families.

Grace joined the Toy Library one year after Margaret in 2001 and has always been a dedicated, committed Auxiliary member.

Always willing to assist in any way possible, Grace has volunteered at the Toy Library and at fundraising events through the years.

It was through Grace that the Toy Library became involved in the catering roster system at the Ararat Town Hall free lunchtime concerts, with money raised at these events helping with the purchase of resources to be used by members of the Toy Library.

Grace has always been a supportive and valued member, who in her gentle way has an awareness of the needs of others.

EGHS chief executive Andrew Freeman presented Margaret and Grace with Life Membership certificates and all who attended the AGM congratulated them on their outstanding service over many years. 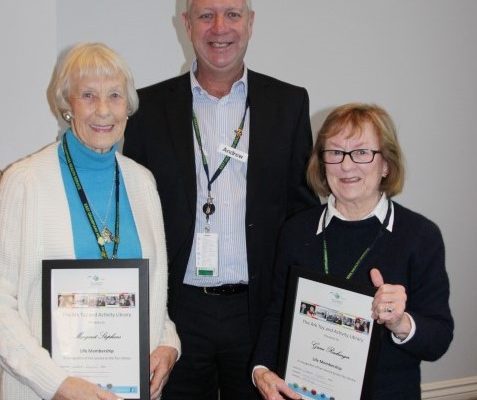