Longest serving staff member to be awarded was Sue McAdie, who has worked at the health service for 40 years.

Sue started her nurse training a few days after turning 17 at Ballarat Base Hospital in 1975.  After graduating, Sue had a choice of a job either at the Ararat and District Hospital or Western General at Sunshine. She chose Ararat.

Sue worked on both first and second floor and Pyrenees House initially, and then in the operating theatre for about 12 months before going to the Fairfield Hospital in Heidelberg to do a post graduate course in communicable diseases.  Her original intention was to go to Scotland to do midwifery, but instead she returned to Ararat to get married.  Sue had three children, only taking a short time off work each time she had maternity leave, as it was only paid for six weeks at that time.

In 1997 Sue became the unit manager of first floor until 2001.  She then went to the Wodonga Hospital for some emergency department experience, and five months later returned to EGHS to take up the role of nursing supervisor, which is now called After Hours Co-ordinator – this is her current role.

Sue has seen many nurses, doctors, CEOs, and DONs come and go over the years.

Sue has enjoyed her years at this hospital and has always been grateful of the opportunities that have been given to her. 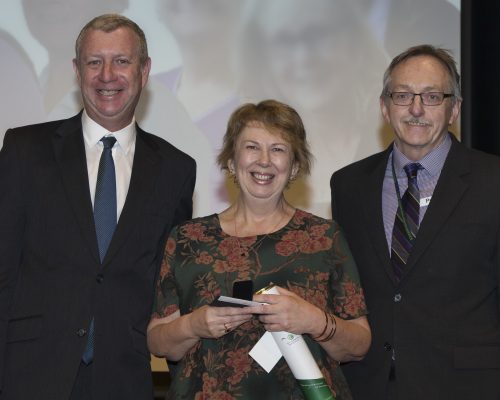