EGHS received funding of $650,000 from the State Government which has enabled a 384 panel, 176.6 kW, solar system to be installed on purpose built carpark shelters in the main EGHS carpark. Of the 45 carparks in this area, 34 are now under cover.

This project is in addition to a 938 panel, 315kW, solar project installed across buildings at the Ararat and Willaura campuses.

The estate of the late Joe Kapp very generously bequeathed $3.2M to EGHS, of which $465,000 was used to finance the roof-top solar project.

Through funds bequeathed from the estate, EGHS has also established the Joe Kapp Scholarship.

EGHS Board Chair Nancy Panter said the health service was delighted to have the support of Joe and Monika Kapp, which has allowed it to support the Victorian Government to have the project completed.

Ms Panter said to run its operations, EGHS uses a large amount of energy – electricity and gas – and as part of its commitment to environmental sustainability, it has established solar generation as a cornerstone to its direction.

“Through this solar project, EGHS is now producing a significant amount of its peak electricity requirements. Through the electricity we produce, you could say that the health service runs for half the day on solar power,” Ms Panter said.

“Financially this means more than $6,000 in savings per month compared to pre-solar usage. In the first year it is estimated we will save in excess of $76,000 in electricity costs as well as having less reliance on traditional power sources.

“The solar carpark also provides protection from the elements for our patients and visitors, including shade in summer and shelter from rain during the winter.”

Ms Panter said EGHS has also been supported by the Department of Health to install LED lights, more efficient gas boilers and air conditioning units which are further reducing its energy needs and carbon footprint. 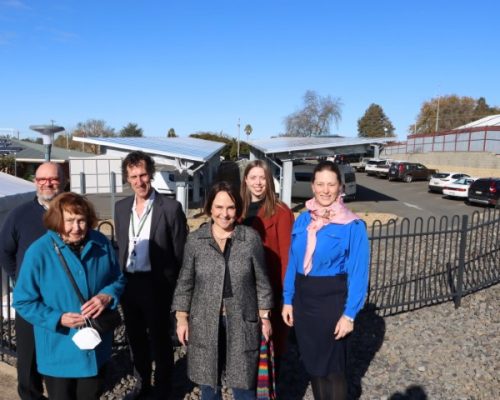