The East Grampians Health Service Ark Toy and Activity Library will have brand new outdoor play equipment thanks to the 2018 Murray to Moyne Cycle Relay team.

Teams representing EGHS in this year’s Murray to Moyne Cycle Relay raised in excess of $18,500, far exceeding their goal of $15,000.

The two teams, the Cranks and Defibrillators, comprised 16 riders and a support crew of seven, including bus drivers, catering and support persons.

Conditions for this year’s ride were in stark contrast to last year’s, with perfect weather providing cyclists with ideal riding conditions and they made good time throughout the event.

“We had probably the best conditions I’ve ever seen in a Murray to Moyne Relay, and this was my 10th year riding,” Cranks’ captain Alan Young said.

“This enabled all our team members, some experienced, some very new to the event, to enjoy their riding sessions.

“We also had a great meal cooked up for us by the Rotary Club of Ararat at Donald, which refuelled us for the home stretch to Hamilton, and we arrived about 12.30am.

“The Sunday ride to Port Fairy saw our team ride as one group and it was great to see a large crowd cheering us on as we rode into the centre of the town.”

The Ark Toy and Activity Library will move into a new space at the EGHS Community Health Centre, which is currently undergoing an extensive redevelopment.

The Toy Library has provided a lending service of toys/games/puzzles for children with special needs in the community for 36 years.

In past years, the Toy Library has branched out to also provide items for residents in aged care and for parents and babies’ groups, particularly from isolated areas of the rural parts of the region, who wouldn’t normally have access to such networking opportunities.

“We took this project on to support the Toy Library volunteers as we saw a need for extra play space for children who use the Toy Library,” Defibrillators’ captain Charlie Reid said.

“The Toy Library volunteers are an amazing group of women who support children with special needs, as well as providing a place for parents and babies to meet in a social setting.

“Adding to the new space with an outdoor play area will give the children extra space to run around in an active setting, something our cycling teams love to promote as well.”

EGHS Interim CEO Andrew Freeman thanked the Murray to Moyne teams for their efforts in raising $18,500 this year.

“Our health service has been participating in Murray to Moyne for close on 25 years and in that time our teams have raised thousands of dollars for equipment across the organisation,” Mr Freeman said.

“We are proud of the work they do in raising funds each year and for taking on the challenge of riding 525 kilometres in what can often be a grueling event.

“I would also like to thank this year’s significant sponsors. They include Christian’s Bus Co, Ararat Medical Centre, AME Systems, S T Hamilton and Son Constructions, Ark Toy and Activity Library Auxiliary, Ararat Advertiser, Ken McCready and the Rotary Club of Ararat, as well as all other sponsors from across the region. Without your support, raising significant funds each year would not be possible.” 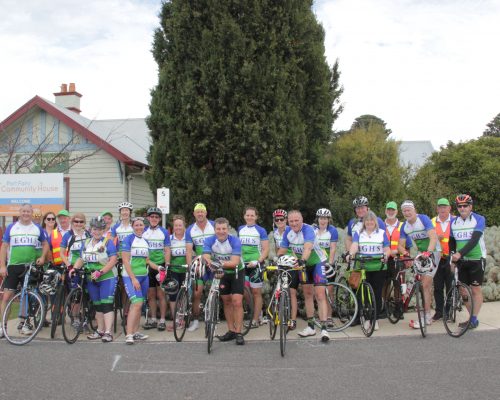