The bus features Murray to Moyne decals and is already turning heads as it travels around Ararat.

Patricia Hinchey Centre manager Jacinta Harman first submitted a request for a new bus around 18 months ago, as feedback from clients was that the old white bus was small, uncomfortable and noisy.

The request was put to the Murray to Moyne team and they happily took on the project of raising $25,000.

“As manager of PHC I went along to their first meeting to show my support and assist with fundraising and meet the team,” Jacinta said.

“Not sure how I ended up being on the riding team, as lycra is not a part of my wardrobe, but it was a very rewarding experience and I thank the Murray to Moyne team for their hard work into preparing for the ride and their dedication to supporting PHC in purchasing a new bus for clients.”

One of the 2017 team captains Alan Young said a lot of work goes into the Murray to Moyne relay for the team, but once the ride begins at Swan Hill there is great excitement and enthusiasm.

“Last year all riders experienced head winds, a late night, lack of sleep and the next day the same conditions but with rain just to make it more memorable,” Alan said.

“It was a sight for sore eyes to see the Port Fairy sign and arrive to a great cheer from the large crowd lining the streets and that feeling of great joy and achievement for a very worthy cause.”

Outgoing CEO Nick Bush thanked all involved for their contribution to the Murray to Moyne Cycle Relay.

“I would like to thank the team members and their support crew, and all our sponsors as well as those who attended all the fundraising events, your effort does not go unnoticed by the health service,” Nick said. 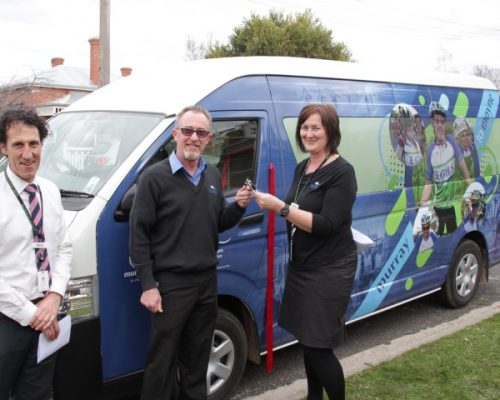