The award was presented by the Governor of Victoria, the Hon Linda Dessau AC and Minister for Ageing Colin Brooks.

“I’m delighted to receive the award and most grateful for the nomination,” Mrs Fleming said on presentation of the award.

“But I must say it’s only because of the trust and support of those around me that I’ve been able to fulfil these volunteer roles, and really the recognition should go to all the individuals and organisations who encourage volunteers to thrive.”

For her services to EGHS, Mrs Fleming was awarded a Life Governorship in 2019, the highest honour EGHS can bestow on an individual.

She was a board member from 2009-19, is currently president of the Willaura Health Care Auxiliary, was secretary of the Ark Toy and Activity Library from 2002-2009 and has been a trustee member of the EGHS Building for the Future Foundation since 2017 and a Community Advisory Committee member since 2019.

Mrs Fleming volunteers extensively within Willaura and is deeply committed to the wellbeing of her community and promoting its activities and achievements.

EGHS chief executive Nick Bush congratulated Mrs Fleming on the award and said all at the health service were very proud of her achievements.

“Heather always ‘acts local’ and is always leading community events to help keep a community thriving, including helping within many organisations, and stepping up to take on roles such as president or secretary,” Mr Bush said.

“Heather is active in fundraising, including writing grant submissions and helping organise events. She has valuable skills in governance and in liaising with government and semi-government organisations on behalf of her community.

“Heather is also passionate about telling her community’s story.

“The community culture in Willaura and beyond has been enhanced and improved through her extensive work.”

Mrs Fleming has also been an Advisory Group member for the National Centre for Farmer Health since 2020.

“Heather has the ability to bring her community along with her ‘for the ride’, encouraging people to become involved in the events and causes she believes important for the community,” Mr Bush said.

“Her gentle nature, intelligence, concern, care and advocacy for her community have gained her respect across the wide spectrum of organisations she is involved with, and her impact is far reaching.” 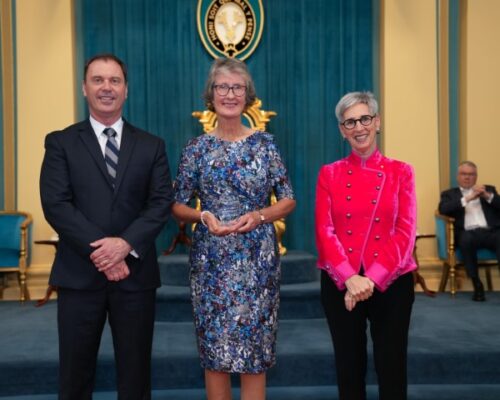 Pictured: Minister for Ageing Colin Brooks and Governor of Victoria, the Hon Linda Dessau AC present Heather Fleming with a COTA Senior Achievement Award at the 2022 Victorian Senior of the Year Awards at Government House