The Victoria Police Blue Ribbon Foundation Ararat Branch held its 18th annual Gala Night in May, at which was announced the commitment of the branch to purchase a new X Ray machine for East Grampians Health Service.

The branch also handed over a cheque for $80,000 as the first instalment towards this project.

The Gala Night was again a great success, with 280 guests in attendance and the ‘generosity of spirit’ being displayed by all who attended, with a record $23,000 plus raised in the main auction and more than $30,000 in total on the night.

Ararat branch president Terry Weeks said on the night that through ongoing consultation with East Grampians Health Service and with the forthcoming $3.9 million refurbishment of the Medical Imaging and Pathology Departments, together with the linking to the Urgent Care Centre, there will be a naming of the Blue Ribbon Wing to recognise the significant contribution of the Foundation and the Ararat Branch.

Since 2002 when the Ararat Branch was established, more than $900,000 has been raised for the health service and a large amount of money has been donated specifically focused on the Medical Imaging Department.

“As part of the discussion with East Grampians Health Service it was recognised that a number of pieces of major medical imaging equipment were coming to the end of their useful life and will require replacement over the next few years,” Mr Weeks said.

“Unfortunately the funding for the redevelopment will not include replacement of major equipment.

“We also have the pleasure in handing over a first up cheque of $80,000 towards this vital equipment and we will be working to raise the additional funds from tonight onwards.

“Of course this donation would not have been made possible without the ongoing generosity of the community and supporters like everyone here tonight that continue to support us, thank you.”

EGHS Chief Executive Andrew Freeman accepted the cheque and thanked the Ararat Branch for their generosity.

“On behalf of everyone connected with the health service we sincerely thank the Ararat Branch and importantly their community supporters who through this wonderful event and the Grampians ‘Ride to Remember’ give so freely,” Mr Freeman said.

“Your ongoing support allows our highly trained staff to continue to work with quality equipment in the best of facilities and provide for residents locally and beyond.” 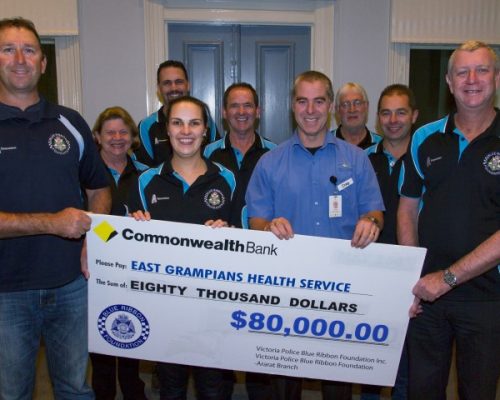