The Victoria Police Blue Ribbon Foundation Ararat Branch has celebrated a number of milestones in 2022, including donating more than $1 million to East Grampians Health Service.

This year marks 20 years since the Ararat Branch was formed, and in that time the branch has worked towards a number of major projects, culminating in the completion of the current project, donating $235,000 towards a general x-ray for the EGHS Medical Imaging Department, bringing total donations to EGHS over the past 20 years to $1 million.

Proceeds from the recent Gala Night enabled a final donation of $65,000 towards the x-ray project, with the x-ray to be installed in the newly redeveloped Medical Imaging Department later this year.

President of the Ararat Branch Dianne Radford said members were thrilled to have passed the $1 million milestone this year.

“Donating $1 million to East Grampians Health Service was always the dream of our late president Terry Weeks and we are all very proud to have achieved this goal on his behalf,” Mrs Radford said.

“We are pleased to have been able to donate much needed equipment to the health service, with the help and support of our very generous community who have got behind our fundraising events over the years.

“Ararat is fortunate to have a health service with state of the art facilities that enable residents to receive treatment in their own hospital without the need to travel to other regional or metropolitan hospitals.”

EGHS acknowledged the support of the Blue Ribbon Foundation Ararat Branch by hosting a dinner in their honour in Pyrenees House.

In attendance were branch members and Victoria Police Blue Ribbon Foundation Chief Executive Officer Neil Soullier, who was presented with a plaque in appreciation of his support over the past 20 years.

“Neil has been on the journey with the Ararat Branch from the beginning, and we thank him for his support and guidance over that time,” Mrs Radford said. 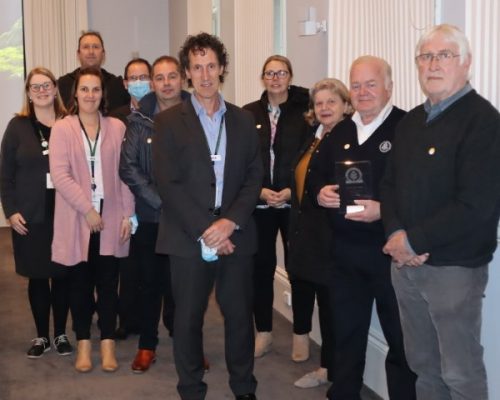