165th anniversary of the death of Sergeant John McNally

Sergeant John McNally was 29 when he joined the Victoria Police Force on June 18 1855.

Like many of his colleagues in the Force, he was an Irishman with previous service in the Royal Irish Constabulary.  Within 12 months he had been promoted to Sergeant In Charge of the Mounted Police at Mount Ararat goldfields in the Wimmera District and Central Victoria.

John McNally did not have a registered number in Victoria Police Force; the current numbering system for members was introduced in late 1858, by which time McNally had been killed.

“Twigham was part of a bushranging gang and over a period of time amassed a large amount of money.  Turner was a particularly slippery character who absconded from Hobart, Tasmania and was recaptured four years later in Carisbrook, Victoria and charged with robbery.  Later, the pair teamed up as part of a notorious gang.”

History recalls that at about 7pm on Thursday October 16, 1856, Sergeant McNally and Constable John Moore, having received information that a wanted man named William Turner (alias Gypsy Smith) was at a miner’s tent about two miles away, rode in search of the suspect.

Turner was well known to the police and was suspected of committing armed robberies in the area. They subsequently located Turner at the tent, and he made a desperate struggle to escape. Just as they had subdued him he called on an associate named William Twigham (alias Cockney Bill) to come and help him.

Twigham came out of the tent carrying a double barrelled shot gun, and fired at the policeman, killing McNally and wounding Moore.

The two offenders then escaped, however they did not remain at liberty for long, and were arrested on October 23 1856 at the Adelaide lead diggings near Amherst.

Charged with the Sergeant’s murder both men appeared before Castlemaine Circuit Court. Twigham was convicted and sentenced to death, and hanged at Melbourne on March 11, 1857. Turner escaped the death sentence and because of legal difficulties the charge of murder did not proceed against him. He pleaded guilty to the lesser charge of manslaughter and was sentenced to fifteen years hard labour.

Sergeant McNally was buried at the Cathcart Cemetery near Ararat and a plaque was erected there in 1974 by the Ararat and District Historical Society and Victoria Police Department.

The plaque was re-dedicated on the 150th anniversary of the death of Sergeant McNally in 2006, by the Victoria Police Blue Ribbon Foundation.

“The Victoria Police Blue Ribbon Foundation and the Ararat Branch, which was established in 2002, have contributed almost $1 million to East Grampians Health Service and are extremely proud of being associated with John McNally in this way and in being able to honour his memory and his service to the Victorian community,” Mr Weeks said. 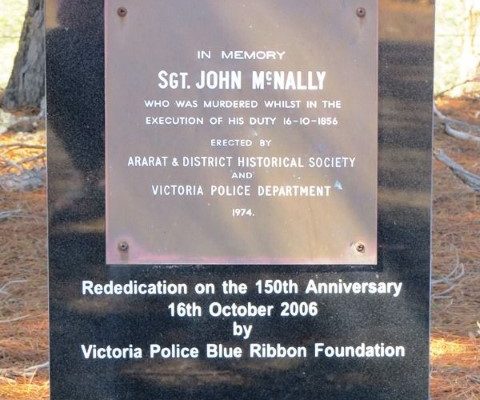 Pictured: Plaque erected at the Cathcart Cemetery in memory of Sergeant John McNally